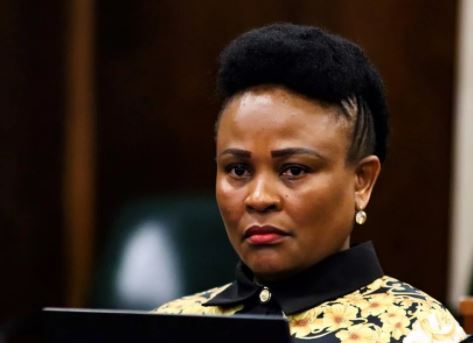 Busisiwe Mkhwebane is the current public protector of South Africa.

She was appointed by president Jacob Zuma before he left office in 2016.

She rose to this position after having held many public offices before time.

Her ascent in her career can be accredited to how well read and knowledgeable she is. She is an alumnus of university of Limpopo formerly known as University of the North where she earned a BProc and the later got a LLB.

Following this, she enrolled for a diploma program in corporate law and a higher diploma in tax at the University of Johannesburg. Consequently, she has her Master’s degree in Business Leadership from the university of south Africa in 2010.

Her educational prowess prepared her for the public offices she held at different points in time.

In 1994, Busisiwe joined the Department of Justice newly and served there as the Legal Administrative Officer in the International Affairs Directorate, where she was assigned the role of prosecuting criminal and maintenance cases.

She served in this position for four years before joining the South African Human Rights Commission in 1998 as a senior researcher.

The following year, she moved to the Public Protector’s office and took up the role of a senior investigator as well as that of an acting provincial representative.

Following this, she became the director of refugee affairs at the Department of Home Affairs in 2005 and she rose to become the chief director in asylum seekers management in the same department three years later.

After serving in the South African embassy in china for four years, she then became the director of country information and corporate management at the Department of Home Affairs.

She worked with the State Security Agency before her appointment as the Public Protector in 2016. Following her appointment as the Public Protector of South Africa, she was involved in a controversy years later when the incumbent president, President Ramaphosa, publicly challenged her after she was labelled as being dishonest by the constitutional court.

Her miseries deepened when the DA Chief Whip, John Steenhuisen wrote the Speaker that the protector was appointed without merit and that it was about time investigations to their inquiry may take place. She was labelled as “incoherent and egregious” in the Bankorp case by the ConCourt.

As such, she was asked to cater for all the costs of her office from her purse, not to mention the chunk of those that have already been incurred by the SA Reserve Bank after they were successful at taking Mkhwebane to the task. By all indications, there is no mercy from the Organisation Undoing Tax Abuse (OUTA).

This lobby group has issued a very open response to the judgement earlier in the day through their Head of Legal Affairs, Stefanie Fick, who says that time has come when she must resign from her position as the country’s public protector.

Despite all of these controversies she has stood tall and still occupies her office as the public protector of South Africa.