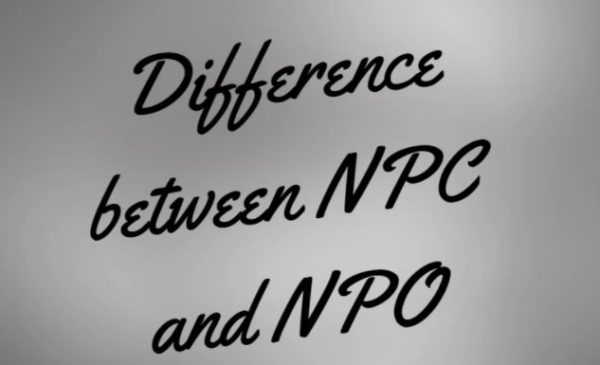 The idea of giving and helping others (charity) has been around since the beginning of time.

Unfortunately, with the passing of time, and as humans became more evolved, charitable organisations were more often than not used for fraudulent and mischievous purposes rather than furthering their charitable objective.

A legal solution was required in order to make the notion of charity more credible and less subject to malicious use. Enter non-profit companies (NPC) and non-profit organisations (NPO).

These different legal entities and concepts are often used in South Africa (SA), however, they are confused with one another. So what is the real difference between NPC and NPO?

Difference between NPO and NPC

Here are the varying aspects of NPOs and NPCs.

The Non-profit organization Act registers NPOs. The Act defines NPO as a trust, company, or other association of individuals created for the benefit of the public. Its profits are not to be enjoyed by the members but reinvested to meet the purpose of the organization.

On the other end, NPC South Africa is defined as a company;

Incorporated for a public benefit or other objects as required by item 1(1) of Schedule 1; and

The income and property of which are not distributable to its incorporators, members, directors, officers, or persons related to any of them except to the extent permitted by item 1(3) of Schedule 1” by the Companies Act. Members present during the registration of the NPC are considered workers of the company. This means they are treated the same way as shareholders on a company for profit. However, the members would not get a profit share, but the entities will get grants and donor funds from the National Lottery Board on application.

In the registration, NPOs can choose between various legal entities that include an NPC, trust, or Voluntary Association. A public benefit trust needs to be enumerated with the Master of the Supreme Court, and its trust deed is treated as the founding document.

Most small NPOs prefer to be set up as Voluntary Association. This type of NPO registers with the Department of Social Development. The process of registering a social development NPO is free and takes roughly two months. Once the registration is complete, the entity is obliged to submit its annual reports that include financial documents, changed constitution, office bearers, and physical address within nine months after its first fiscal year. All registered NPOS are accorded a 30-day notice if their reports are due.

Even though all organizations that are non-profit and not part of the government are required to register with the NPO Act, NPCs are excluded. This is because Non-Profit Companies are audited and treated like typical businesses; hence, they do not need the credibility that comes with registering under the non-profit company Act. Nevertheless, All NPCs must be listed with CIPC.

CIPC, which stands for Companies and Intellectual Property Commission, refers to an agency within the Department of Trade and Industry in SA. This organization was created by the Companies Act, 2008 (Act No. 71). It serves as a juristic person who works within the public administration, functioning as an institution outside the civil service.

CIPC has various functions like registration of companies, intellectual property rights, and co-operatives, as well as their maintenance, among other roles.

Both NPO and NPC are allowed to register with SARS (South African Revenue Services) as a PBO to benefit from special tax exemption. Non-profit companies (NPCs), as well as trusts, can still get PBO status even without needing to register under the NPO Act.

The difference between NPO and PBO is that the latter stands for a public benefit organization, and it can be a trust, company, an NPC registered under the new Companies Act, or any other association that has been registered with SARS.

All non-profits are encouraged to register as PBOs per section 10 (1) of the Income Tax Act. The Act states that such non-profits can be exempted from regular income tax on condition that it is not distributed directly or indirectly to its members.