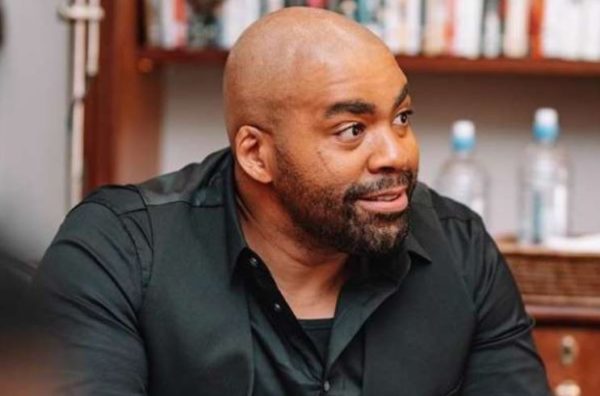 The talented actor have won the heart of many people due to his excellent input in the entertainment industry.

Aside being a popular Tv star, he is a happy man who enjoys spending time with his family. This ambitious man is a trailblazer that everyone in South Africa should recognise.

Shona Ferguson is a local actor who is best known for his role as Dr. Lebua in the soap opera Muvhango. His official name is Aaron Ferguson.

Presently, he owns a film production company, Ferguson Films, and has featured in multiple films and soap operas in South Africa. He is also a multi-award winner and a respected figure in his country.

Here’s everything you need to know about Shona Ferguson.

Born April 30, 1972, Shona Ferguson was born and raised in Gaborone, Botswana. His parents were a very innovative couple and moved occasionally for work purposes. As a boy, Shona was trained by his parents to become independent and responsible.

Shona‘s academic stint was somewhat short-lived. After completing his basic and high school education, Shona developed great interest in music. He moved to Lesotho as a teen to secure a DJ role. He also acquired training in many fields including IT and business development.

In 1992, Shona Ferguson worked casually as a DJ in The Palace Hotel Night Club at Lesotho. He returned to Botswana and secured a job at EDUTECH; working in the IT department. His performance was termed impressive by his colleagues, who regarded him as a sales expert.

For his outstanding efforts and performances, he got rewarded as the Top Sales Manager (1998-99) in EDUTECH. Shona Ferguson got introduced into the movie industry few years later. He secured a role in Mzansi TV series, Ace on Generations before featuring in Muvhango in 2006.

He also starred as ‘Itumeleng‘ on an M-Net soap opera from 2011–2013. He co-established ‘Ferguson Films‘ with his wife, Connie Ferguson that same year. Together, they produced their first film, Rockville. Shona also featured in the film till 2016.

In recent times, the movie producer and actor has gone on to secure roles in The Gift, Isidingo, Scandal! and Mrs. Mandela. His film company has also produced numerous series including iGazi, The Throne, The Herd, The River, The Queen, and The Imposter, with ‘Kings of Joburg‘, a Netflix series being a recent masterpiece.

Shona Ferguson got married to Connie Ferguson in November 2001. Their daughter, Alicia Angel Ferguson, was born on the 7th of June, 2002. Shona also had a daughter, Lesedi Matsunyane in 1993 before officially getting married to his second wife. The actor and movie producer devotes his time to film production. He also travels frequently and is an household name in the southern part of Africa.

Shona got his first tattoo on the neck when he was only 16 years old. Those on his left arm cover the entire arm. Near the top of this arm is a picture of his daughter Alicia Angel. On the same arm is a rose that has his wife’s name across the flower. On the right arm, he has tattoos of 2 dragons while a cross with angel wings is on his back. He reports that all his tattoos show his journey as a man.