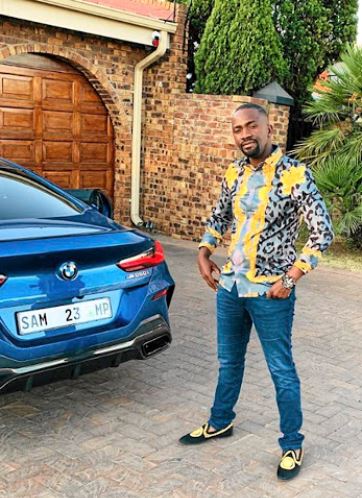 Sam Mshengu is a South African based businessman and the brains behind Sam Holdings. He is popularly known for his flashy lifestyle, with some people refer to him as the ‘trucker millionaire.’

The celebrated businessman, Mshengu, was brought to life on the 15th of December, 1995 in Mkwarela, Venda South Africa.

His beginnings were not as rosy as his current days. Two days in earth, Mshengu lost his soldier dad to a gunshot while on a mission in Congo.

He, however, grew up and figured a way to make his time on earth worthwhile. Mshengu, knowing that a lot depended on his hardwork, began working at an early age of 11, and he made a lot of connections as well as gathered the necessary skills and knowledge to begin his own business.

Sam Mshengu of Sam Holding began his road to riches at the age of 11 when he worked as a farm boy in Limpopo’s Orange farm. He developed an admirable work ethic while at his job and attracted the attention of his boss, who later gave the young Mshengu his trust.

Years went by, and the hardworking Mshengu soon landed a job as a truck driver for his boss. In his new job, he transported maize and other commodities to Zambia, and this was when things turned for the better for him. He learned all the inner workings of the truck business and saved some money in the process.

Later, the aggressive Mshengu bought 3 trucks at R3 million. And this is when he began to make a name for himself. He has since grown this number to 52 trucks.

Sam holdings owner, Mshengu, has been in the business for a while now. Sam holdings group is a logistics company that deals with the transportation of goods both long-distance -from country to country- and within South Africa.

Recently, the young millionaire made headlines when he drove a convoy of expensive cars to Durban. The convoy had 72 cars, with 10 out of these cars being his own. Following his July convoy to Durban, Mshengu received heavy criticism from the public. This forced him to respond to all the claims that people had, concerning his source of wealth.

Mshengu began by reminding everyone about his difficult upbringing. This was mainly due to the death of his father. Their family struggled to make ends meet, and they would sometimes go hungry. This forced him to quit school and start fending for himself.

Sometimes back, the Hawks arrested the self-made millionaire in Emalahleni, Mpumalanga. This was allegedly in connection with his citizenship status. Investigations into the young Mshengu’s citizenship status were started by the Department of Home Affairs, with reports indicating that he might be from Zimbabwe and that he got his South African citizenship fraudulently.

Mshengu’s wife is called Lerato Legodi. The two are close and share a marital bond that is so amazing.