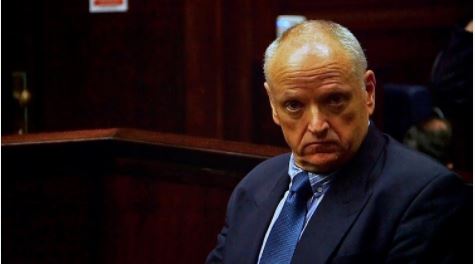 Rob Packham, a manager at Twizza started is early days as a gentle, refine young man when he decided to tie the knot with his heartrob Gill Packham.

The blissful union bore two daughters, Nicola and Kerry Ann Meyer. It was a really a happy home until infidelity struck into the marriage, the infidelity was badly handle by both patners and spoilt the interpersonal relationship between both peer.

Prior to the wedding of one of their daughter to her heartrob, Ciaran Meyer, the unforturnate happened behind Dier River Railway station, Gill was found face down at the boot of her burnt out BMW.

Rob was arrested and got a bail of R50000, preliminary investigations gave a hint of blood stains in his car, in the en-suite bathroom they share and their garage due to this new strain of evidence, his car was towed for further investigations.

It was also noted his pleas by his lawyer, was struck out. It was gathered while on bail, Rob Packham through email was soliciting for sex in an harassing manner after the victim reported the matter to the police authority’s which made rob got rearrested.

He was made to pay a fine R25000 asides the initial bail he earlier got for being in breach of his previous terms of release. Rob continued to violate the terms of release having contacted a state prosecution witness in his initial trial, this led to the court being angered and put behind bars, which hindered him the right to walk his daughter down the aisle.

While undergoing trial, at Western Cape High, more revelation was unveiled leading to his phone signals being traced to the site of death of his wife before evidences began to roll by the law enforcement agents.

He was sentenced to twenty years of murder coupled with four years for obstruction of justice, two were later suspended.

It was noted throughout the trial and conviction Rob didn’t feel any remorse.