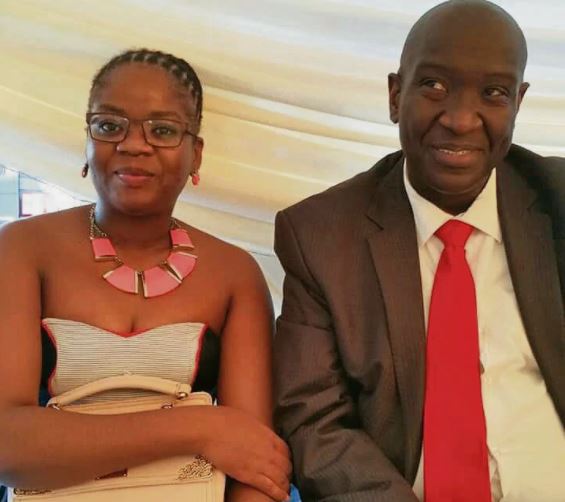 People all over the world now resort to finding love on the web, this isn’t a bad idea. What is a bad idea is trusting the person whose identity is unknown or unverified by you with your most intimate secrets in the name of catching fun online.

Many people have unsuspectingly fallen into the hands of online lovers who dupe, scam, and or blackmail them.
Daisy Maseleme is one of such cases. She was involved in a sex scandal with one Ben 10 from Nigeria whose real name is Emmanuel Williams Ngwu.

The two had reportedly met on the web and they became lovers. After they began dating, they made several sex video calls in which Ben 10 unknowing to Daisy recorded one of them and released it after he tried to extort money from her and she didn’t budge.

The Limpopo HR manager almost had her life, marriage, and career ruined after this blackmail because the video was quick to go round the internet.

Daisy was shocked about the whole turn of events because she didn’t in any way see it coming. Here is an update on the scandal ever since it happened.
1. Her relationship with her husband and in-laws was severely affected after the video was leaked
Tshepo Maseleme, Daisy’s husband who is a lawyer was shocked by the blackmail. He couldn’t comment on the leaked video when he asked to. Her in-laws were however swift to respond to the issue. Unconfirmed reports say that they had tried to instigate Tshepo Maseleme to divorce her and live his life without her. But her husband had refused and they are still married.
It is important to recall that the duo of Tshepo and Daisy had been married in an expensive wedding ceremony and that the blackmail happened barely four years after they got married.
2. Daisy made the video call from her home
The background of the video revealed that Daisy was in her home when she made the sex video call. She was dressed in her pajamas and sat on her couch. There was no sign of anyone else been in the house with her, whether her husband or her children. So she must have probably indulged the moment to carry out the act that almost ruined her marriage and career.
3. The Nigerian “lover” demanded $10,000 from Daisy
Ben 10 demanded $10,000 from Daisy to keep the video private after he had recorded it. He obviously knew who he was dealing with and so had taken the action to con money out of her. Daisy didn’t realize how gullible she had been in the whole thing until Emmanuel threatened to release the video because she had completely trusted Emmanuel with her body and all. The video was uploaded to the internet as a result of her refusal to pay the $10,000.
4. Daisy and Emmanuel never met
Daisy and her online lover never met physically, all their interactions and conversations were conducted over the internet. Even though the two conversed in the video like they have been friends for long, they never had any actual contact. They were complete strangers to each other.
5. Emmanuel was a conman with several Facebook accounts
A closer look at Daisy’s matter revealed that her boyfriend Ben 10 was an impostor. Some of the accounts linked to him are registered under the names Manuels Cosmas and Queen Polly Moribili. Obviously, this young man had evil intentions from the start. It is for this reason that he had to trick Daisy into engaging in the dirty act so that he could con her. Luckily enough, to him, he managed because her prey never took time to research about him.

Daisy has since moved on since the scandal broke out. Though when it happened, her world almost collaspsed because of the blackmail but she has learnt her lessons and will steer clear of online dating.