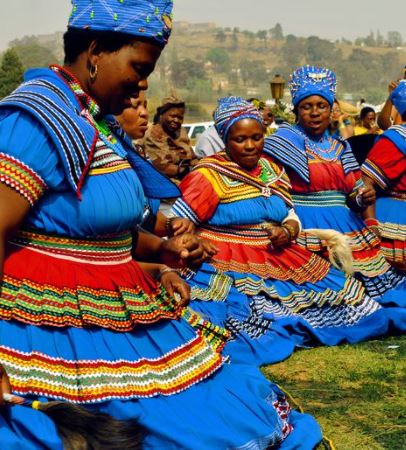 Africa is a continent full of diverse people with unique identities.

You will never get bored discovering the rich cultural practices of Africans and their dynamism.

The Basotho tribe identify themselves through the use of their clan names, which specify their ancestral origins. These clans are namely the Bataung, Basia, Bafokeng, Makgolokwe and Bakuena et al.

Their history dates back to 1822 where the clans lived together in peace until they were invaded by the Nguni. Most of the fled from the attack which led to a dispersal of the clan and those who fled to the south formed what is now known as the Basotho nation.
The Sothos live a simple life which is evident in their political and social structures.

For their food supply, they solely rely on agriculture and animal farming. They are a highly organized society with roles for each gender and age group defined in the community.

Their culture is displayed in their daily activities, from the food they eat, the way they dressed and their interactions with others.

In a bid to maintain their social structures, roles are defined as men and boys tend to the animals and their well-being while women work on the farms and collect water from springs.

They also have a traditional way of dressing which identifies the age group or explained the significance of an occasion.

The following are examples of Sotho dresses which identifies the age group:

Sefaha sa letsopa: These are neckpieces made out of clay bead worn by girls..
Tseha: An undergarment made out of sheepskin cut in a triangular shape and tied around the body in such a way as to cover the private parts worn by young boys. But the length was increased by age.
Basotho blanket: The Basotho people have a special blanket which is made by the male gender for the chiefs. This blanket is known as lehlosi, and it is made up of skins of wild cats or a leopard.

They grow their own food, and most of the foods they grow are maize, millet, melons, pumpkins, peas, beans, and ground nuts. Also, during their traditional ceremonies, they have a traditional alcohol known as jwala, which plays a vital and prominent role in their culture.

Most of their histories are told orally through folklore. The elderly ones see it as a way of educating the upcoming generation and also as a way of preserving their history and events in the sand of time.

The Sotho people have a very interesting culture, and on your next visit to South Africa, you should visit the Sothos, because of their traditional alcoholic drink, Jwala, which features in all of their festivities and stands tall among other cultural elements, if not for anything else.