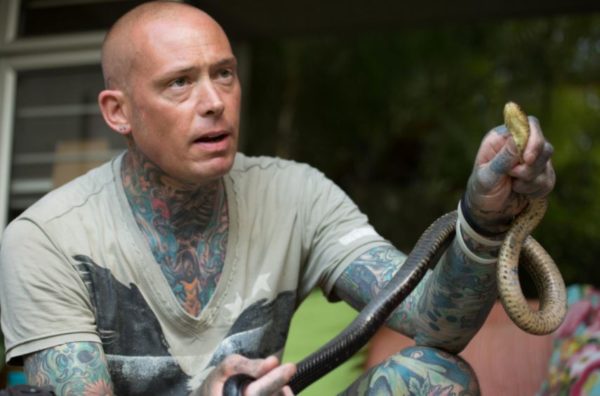 At first glance, this heavily tattooed snake catching star may not look like your typical conservationist.

However, after obtaining a deeper understanding of the courageous personality, it slowly begins to unfold how Simon is creating a better home for humans and snakes alike.

His captivating show, Snake City, showcases the charmer at work. They entertain viewers by sharing their experience as they go toe to tail with some of Africa’s most dangerous snakes.

In this article, we follow how a young boy’s respect for living things led him to star in five seasons of the educative and thrilling Nat Geo Wild show, Snake City.’

We also learn more about his ex-wife, Nadine, and his current girlfriend, Siouxsie Gillet.

Simon Keys was born in England on July 15th, 1974 (Age 45). He grew up in Hertfordshire where he still spends six months every year. The other half is spent in the picturesque tropical coastal city of Durban. Siouxsie Gillet and Simon Keys house in England shocked millions of viewers when they got to see how they share their home with over 80 snakes, not to mention the numerous other animals like tarantulas and crocs.

The fear of snakes is a common and justified one. Snakes like the Puff Adder can cause death. However, these creatures serve a critical role in our health and safety. Snakes hunt rodents like rats and mice.

Simon comes from the UK, which was devasted by the Bubonic Plague of the 14th century that killed over 50 million people. Perhaps if they had snakes, this loss would have been much less. The disease was carried by rats which were brought by the people’s living conditions.

While filming the infamous reptiles, Simon and his crew are exposed to dangers like bacteria found in rat droppings which could carry up to 100 diseases.

Rodents also destroy up to 20% of harvests. As a solution, the couple has partnered with vineyard farmers who use mole snakes to curb the rodent problem in their farms. They exchange these snakes for wine which is not a bad trade-off for them.

Simon’s love for animals started while he was a child. He was intrigued by the Nat Geo shows like the ones hosted by the legendary Steve Irwin. He was not much of a reader up until his thirst for knowledge on wildlife exceeded his dislike of books. He caught all sorts of small animals on the weekend. Starting with frogs, newts, and lizards.

Simon left school at the age of 14. His first income came from hairdressing, where he worked on the weekends. He later shifted to full time for about six months.

His experience with animals grew while working for an import-export company that brought in corals and fish from all over the world. The work there was intense, and some weeks he pulled 60 to 70-hour shifts. He worked there for 11 years.

Simon got married to Nadine Keys. Simon Keys wife was originally from South Africa, and in 2005, they relocated to Durban South Africa. One day while he was relaxing outside his house, he saw a green snake descend from a tree, and it slithered into his neighbour’s garden. He immediately rushed round back and informed his neighbour further requesting to remove the snake for him. This keen observation revealed the need for such services in South Africa.

He started a Snake retrieval Service where he charged 150 Rand for a call out. After some time, they realized that it was not sustainable due to the wear and tear experienced by their vehicle. The fuel cost was also a problem, especially when they responded to remote rural areas where the people were often unable to raise the fee.

Simon pushed on and would complement his salary by diving and catching marine fish during the winter months. He braved the shark-infested waters, but this is hardly a surprise for this brave adrenaline junkie. During one of those months, he got a contact at the television production company, Earth Touch.

Her dad was a butcher and her compassion for animals began there. She went on to work on movie sets. She did all the creepy crawlies in Harry Potter. This imaginative fantasy included a scene with 80 cockroaches. She did Ridley Scott’s Exodus.

When Keys got the go-ahead for season 2 of Snake city, he asked Siouxsie to be his co-host. They started as friends, but Simon being the charmer that he is, he won her heart. Snake City new girlfriend set things off from season 2. The show became an educative one, and they shared vital information about what to do when people come across snakes.

The Snakes in the City cast includes 12 crew members. They have two cameramen who document the drama as it unfolds. They also have a resourceful driver who used to be a dirt bike rider. His skills behind the wheel have saved many lives of both people and snakes. During emergencies, he uses back routes and can even cut through cornfields to get there on time.

One time as he was catching a spitting cobra, the serpent spit on his unhealed tattoo. He notes that the venom can cause immense pain when it lands on an open wound or the eyes. The first aid is to wash with a lot of water, milk, beer or urine. It may be considered disgusting, but it is the lesser evil compared to going blind.