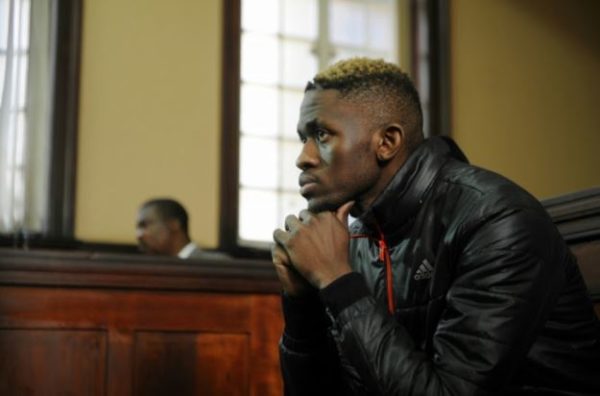 Convicted murderer Sandile Mantsoe has been sentenced to a cumulative 32 years in prison after murdering his ex-girlfriend Karabo Mokoena.

According to Judge Peet Johnson, the accused death sentence should be a strong warning against the abuse of women.

Mantsoe was sentenced to 30 years for Karabo Mokoena death murder, five years for assault, and four years for the attempt to defeat and obstruct justice. According to the court, his effective sentence amounted to 32 years.

Close friends to the couple claimed that Sandile was an abusive and violent boyfriend. He beat her several times and kicked her as well.

On April 28, 2017, at 10:06 pm on Friday, CCTV footage showed Mantsoe struggling as he drags a large bin, which is believed to carry the body of Karabo Mokoena.

Sergeant Matshidiso Maseko, who was investigating the murder of Karabo, received a call from Captain Bhekisisa Mhlongo, who claimed that the accused had admitted to killing the deceased. Mantsoe claimed that on the day she died, he had come back to his Sandton apartment from a business meeting and found Karabo had committed suicide.

However, he stated that out of fear and distraught of being accused of her death, he disposed of her body in a pool of acid and petrol, put a tire around it, set it on fire, and ditched the body in Lyndhurst. He believed that the beauty was cheating on him with a Nigerian man that lived in the same apartment block as him.

The murder of Karabo took place when cases of assault against each other were ongoing.

Sandile claimed to have been a positive influence on the late Karabo. According to him, he came into her life when things were not pleasant, and unfortunately, he was the last person present when she collapsed. Sandile is a father to three children, two with his former wife, and one with Nonhlanhla Dlamini.

The remains of Karabo Mokoena were found by a passer-by in Lyndhurst, in the heart of Johannesburg.