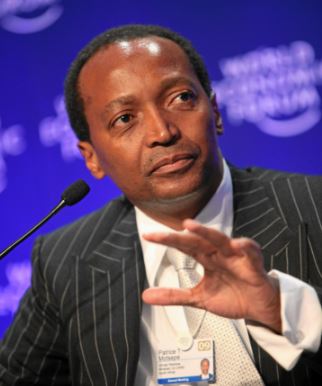 Patrice Motsepe is a South African billionaire who made most of his fortune from mining.

He learnt the basics of mining at a young age while he was working at his father’s Spaza shop which mainly catered for black mine workers.

His father was first a school teacher before setting up the Spaza shop.

He specializes in mining and business law. After graduating from Law school, he became the first black partner in Bowman Gilfillan’s law in 1994. The same year Nelson Mandela was elected as the first democratic president of the country.

While Mandela’s government was promoting black empowerment, Motsepe founded Future Mining, which provided contract mining services that included the cleaning of gold dust from inside mine shafts for the Vaal Reefs Gold mine, and implemented remuneration system that combined a low base salary with a profit-sharing bonus

In 2012, he was named South Africa’s richest man with an estimated fortune of R20.07 billion. He also won the South Africa’s Best Entrepreneur Award in 2002. However, he moved down to sixth place in 2017, with a new balance of $1,8 Billion.

He is currently the interim chairman of the Black Business Council and is a founding member and former president of one of South Africa’s most influential business advocacy and lobby group Business Unity SA (BUSA).

Also, he is the owner of Mamelodi Sundowns F.C, a premier league soccer club.

Patrice Motsepe is married to Dr. Precious Moloi, a doctor and fashionpreneur.

They have three children together. He is also a brother-in-law to President Cyril Ramaphosa.