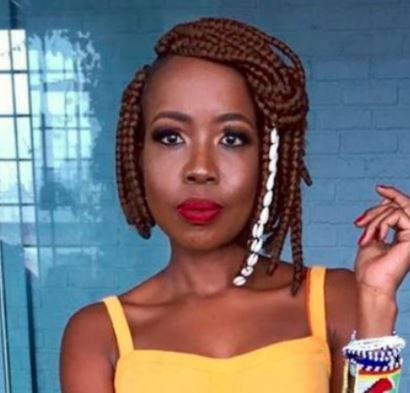 Ntiski is an artist whose artistic trajectory is inspiring to watch. She is dynamic and known for so many things; first as a blogger, as an artist, as an activist, as a poet, as a bead work artist etc.

Ntiski is an advocate for the slum communities in South Africa, one of whom she was brought in. She was brought up in Soweto one of the roughest slums in SA and so understands the plight of those who live there.

She is using her influence and popularity to clamor for a change and draw the attention of the government to the challenges faced by those whose homes are in the slums.

She actively promotes the street culture which is a reflection of her personality and talent, and this earned her the nickname “street queen.”

The “queen of the streets” was raised by her parents alongside her two other sisters who were great writers.

Her parents are Belede Mazwai and Dr Thami Mazwai who were writers and whose writing influenced the history of revolution in South Africa.

Her mother was a militant journalist and Ntiski attributes her activism spirit to her.

Not only did she inherit her mother’s activism, she also got her writing skills from her and her father. Ntsiki writes poetry and has a blog where most of her poems and catalogues are published. Aside from that, her style of presenting poetry is unique and unusual, as a poet, she combines music with her spoken words.

Her poetry is performed with a DJ and a full band. Her unique style of performing her inspirational poems with beats is gradually gaining popularity among her fans.

Ntiski describes herself as a musical poet; she uses both vocals and poetic word play to create beautiful music. Her musical career gained recognition in 2004 even though she said she has been working as an underground artist for longer.

Her first single “light up my life” revealed the birth of a different kind of talent in the industry.

She released a song the following year, “uWRongo” and this song was adjudged to be one of the bestselling songs in the country.
Writing and activism isn’t the only inheritable trait in the Mazwai family, music is also one of it.

Nomsa is also a popular South African singer and composer who is famous for her vocal abilities.

However, both have been caught in a web of sibling rivalry and the feud doesn’t seem to have been resolved.

She obtained a diploma in marketing management in 2008, and for her bead works, she also attended a business school where she studied on how to be and entrepreneur and lastly, she is an alumnus of the Rhodes University, while she was there she studied creative writing.