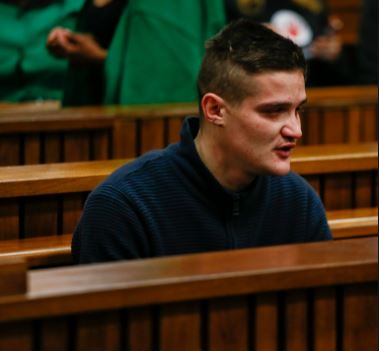 Nicholas Ninow is a South African who is accused of raping a 7-year-old girl in a toilet of a Dros restaurant in Watermeyer, Silverton in Pretoria in the Gauteng province of South Africa.

The Dros rapist sentence was one that brought back a lot of hope in the justice system of the country. Despite being a long trial, the end was relieving for many.

The court proceeding revealed so much about the sex offender. It was during the trial that South Africans and the world at large got to learn of how Nicholas was also abused at a young age.

Other revelations on his drug and substance abuse from the tender age of 10 through his teenage years also came up. He was a broken child whose experiences contributed to his evil act.

Nicholas Ninow’s mother is known as Chantelle Ninow. She too struggled with drug abuse, something that she reflected on her kids.

In a testimony captured in a video, Nicholas blamed drugs for his actions. He said that he was not thinking about the consequences of his actions when he did it. He had been high for a few days and was making decisions impulsively.

However, he went on to tearfully apologize for his actions saying that what he did condemn him more every day ever since the realization of his action dawned on him.

Before he could be cleared and declared fit to undergo trial, the magistrate ordered on 31st October 2018 that he should undergo a psychological evaluation by three doctors.

After a series of testimonies from both sides, and with the state prosecutor, Dorah Ngobeni, being especially merciless, the case ended with Nicholas being convicted and sentenced with the maximum sentence for rape offenses.

Ngobeni was quick to challenge his reasoning, asking why he went ahead to destroy the evidence by flushing away the girl’s pants after the act. This could only mean that he was well-aware and of sane.

With several people taking the stand to explain why he had done what he did, it was left for the judge to decide.

The psychologist explained that if the accused was guided psychologically and rehabilitated to deal with his drug abuse problem, he would change and pose no threat to the public since he had not indicated any pedophile tendencies.

In a move backed up by many different quarters, the judge found Ninow guilty and sentenced him to life in prison for the first count of rape.

He considered his age and said that there was nothing immature about the decisions Nicholas took when he flushed the child’s pants after raping her.

The judge did not find any evidence of Ninow’s remorse despite his defense bringing in a letter and poem to court. Even though they were addressed to his victims, they never got to the intended destination.

According to the judge, this only showed that the 20-year-old victim was aware of the heftiness of his case and not necessarily remorseful.