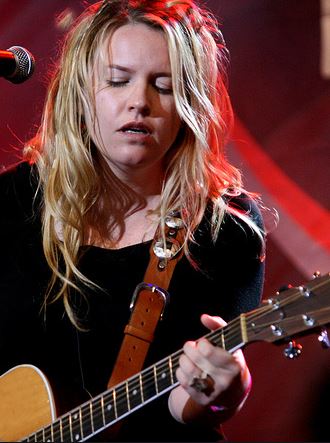 Karen Zoid is dubbed as the South African queen of rock, she was first known in 2002 after she released her solo album Poles Apart. She is a singer, songwriter, guitarist, and composer.

She has dominated the Afrikaans and South African music industry and she is mostly known for emotionally charged music. She received international and national acclamation when she released her hit track Afrikaners Is Plesierig.

Most of her fans are mostly youths and they are referred to by the media as the “Zoid generation.”

Just after she came into limelight, her song Afrikaners Is Plesierig was listed by Sunday Times as one of the100 greatest South African songs.

This was produced by EMI. Following this, her second and third albums; Chasing the wind and Media which were released in 2003 and 2005 respectively, they were widely received by her fans and increased her fan base.

She left EMI in 2017 and went ahead to produce musical albums like Postmodern World, Ultimate Zoid, Terms and Conditions, Zoid Afrika and Drown Out The Noise  between 2007 and 2015.

Zoid has written music for television, with two of her songs featuring in the 2006 movie “Number 10”. She performed at the inaugurations of President Thambo Mbeki and President John Zuma in 2004 and 2009.

She also won the SAMA awards for Best Female Solo Artist in 2008.

Tracks from her album were included in the audio entertainment of international flights to and from South Africa. The talented musician is one of the first South Africans to secure major deals with international labels like EMI and Sony music.

Karen Zoid was born in Brussels, Belgium, to a South African diplomat. She grew up in Belgium before moving back to Johannesburg where she attended the National School of the Arts before proceeding to study drama at AFDA in Cape Town.

Zoid dropped out the university to focus on her musical career in 2001.

In 2004, Zoid got married to one of her band members, Don Reineke, a guitarist. But the couple divorced years later even though they have a son together.

She is currently a judge of a singing competition held in South Africa, The Voice.

She became a judge on this show in 2016. Asides that she has the reputation of having shared the stage with international actors like Metallica, John Mayer, and Annie Lennox.