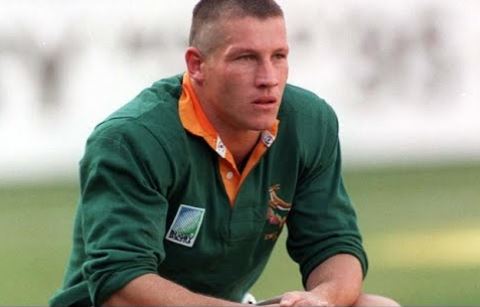 James small is south African rugby player who has been making waves over the past years before his demise. The magnificent player contributed in the 1995 springbok team where they won the world cup.

Small who has been described as one of the best in the sport passed on Wednesday 10 July 2019, as a result of heart attack. He was just 50 years old.

A lot of people are still making peace with the fact that one of their best is no more. Small will be remembered for representing the Lions, the Sharks, as well as Western Province at provincial levels.

He was a South African rugby union footballer who played on the wing for the Springboks. Aside from the fact that he was an excellent player, he had a lot more going on in his life than just the sport. He was a family man and a beloved son. Here is everything you need to know about Small.

Small was married to actress and model, Christina Storm.

James and his ex-wife Christina share a daughter, Ruby Small.

Small played 47 Tests for his team, the Springboks from 1992 to 1997 where he scored 20 tries. He debuted for Springboks against New Zealand in Johannesburg in the year 1992 where he went on to play 47 Tests up to 1997. It was here that he scored 20 Test tries. The last of these scores was during his last match that happened in the country of Green and Gold, against Scotland. He scored a try which at the moment went on to break the Test record of Danie Gerber.

Before his death, Small played tests against New Zealand, Western Samoa, Australia, Fiji, Italy, Romania, France, England, Argentina, Scotland, and the British & Irish Lions. He was the first South African that was sent off during a test after he was dismissed when playing against Australia back in 1993. When he started out in his provincial career, Small was part of the Golden Lions (at the time known as Transvaal), the Sharks (back then referred to as Natal) and Western Province. He appeared in the Currie Cup finals for all three team. He finally lifted the golden cup in the colours of the Sharks and WP.

James Small was rushed to hospital in Johannesburg on Tuesday night July 9th and died on Wednesday, July 10th, 2019 from a heart attack.