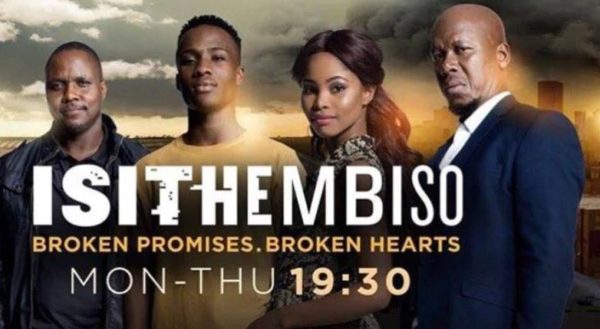 Isithembiso Teasers give a picture of what to expect in the March 2020 episodes. It airs on Mzansi Magic from Mondays to Fridays at 19h30.

Banzi, Kero and their crews get ready to perform a daring heist. But their plan encounters difficulties. Dolly extracts a shocking secret from Koloi.

Banzi outsmarts Kero and Karlujah and ends up with David’s money. Tiro has sad news for the boys and Tshepo begs Vivian not to leave Kero.

Despite Nhlamulo’s warnings, Palesa takes a bold step with Banzi’s money. Kero asks for Vivian’s forgiveness, and makes a decision about the future. Abednego’s in big trouble.
Monday 10 February 2020
Episode 226

Nhlamulo ponders love and principles. Abednego wonders if his luck will ever turn. Karlujah and Diamond imagine different lives for themselves.

Vivian’s confession leaves Kero with little choice. Nhlamulo messes up his grand gesture and Banzi’s attempt to bribe his way into power backfires.

Abednego’s secret winnings may not stay secret after all. Palesa and Nhlamulo hit a wall. Karlujah plans a proposal.

Kero can’t forgive Vivian, despite all advice to the contrary. Cheez manipulates Palesa, she makes a rash decision, while Abednego battles to contain his lies.

Jackson digs around for dirt on Banzi. Kandy is bribed to keep a secret, and Indy considers a new business venture.

Oscar and Abednego clash over the money as Khensani fans the flames. Zamani is desperate for lobola cash, and Chunks finds out what Karlujah had actually planned for Valentine’s.

Jackson’s net closes in on Banzi, while Khensani sinks her claws deeper into Abednego. Oscar seeks legal counsel from Nhlamulo, and Kandy realises she’s not cut out for babysitting duty.
Monday 24 February 2020
Episode 236

Karlujah finally pops the question to Chunks, but an ugly surprise waits for him back home. Zamani is persuaded to buy the skoroskoro, and Oscar borrows money from Abednego

David uses Karlujah to turn the screws on Banzi. Karlujah is M.I.A. and Chunks is stressing. Chris’s offer takes Sne by surprise.