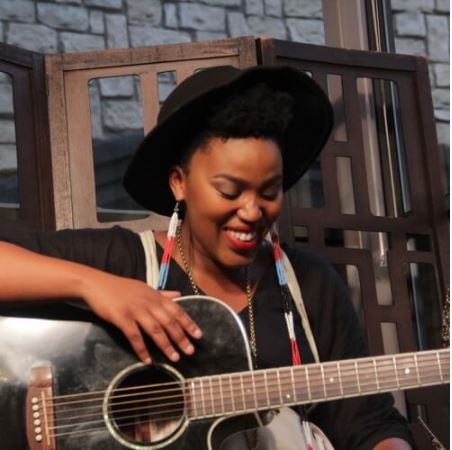 Msaki, whose real name is Asanda Lusaseni Mvana, is a South African singer and songwriter. She has been on the rise in the music industry with her unique combination of soulful folk with symphonic movements, Xhosa lyrics, and African poly-rhythms.

The talented artist was born in East London, South Africa in 1988. She was 32 years old as of 2020. She was born into a family of music. Her father was a DJ while studying at the University of Fort Hare and her grandfather was also a well- known composer and songwriter. Making good music definitely runs in her blood.

Asanda always found a way to combine music with her education. In 2008, she joined an alternative rock band while she was taking a course in Visual Art and Design in East London. During this period, she also spent time recording music in a friend’s studio.

Msaki went to Grahamstown to further her studies in Visual Art and that was where she formed her first band. She later moved to the University of Leeds, England as an exchange student in 2010, which is where she learned how to play the guitar all by herself. When she returned to Grahamstown in 2011, she became involved in the indie music.

One of the first things she did was set up her own independent record label which she named One Shushu Day Artistry. She is signed to this label.

She put together a collection of songs that she had written over time and released it as an EP (extended play) titled Nali’themba funded by a grant offered by the Corporate Social Responsibility Budget and the production of Cobus van Dyk.

Msaki songs have continued to garner great success since. She is known to make some of the best South African love songs. For example, Love Colour Spin with Mobi Dixon, Springtide with Revolution. Others are Black Coffee ft Msaki Nal’ithemba remix (which was on his album titled Pieces of Me) as well as Tresor ft Msaki Sondela. Tresor and Msaki worked together again on Pearls to Swine, alongside Kid X, which she is currently promoting.

Msaki has 3 children with her husband, with the announcement regarding the latest addition to her family coming earlier this year. She has taken great steps to keep the identities of those in her family private, and this also extends to Msaki husband.

We do not know who Asanda Mvana husband is, but she has spoken about him in very sweet words from time to time, including her official personal Tumblr blog.

Her nominations turn to wins, with awards such as the 2016 First Place Gold Award for Music at Cape Town Fringe and the 2016 Standard Bank Standing Ovation Award at the National Arts Festival, which was held in Grahamstown.