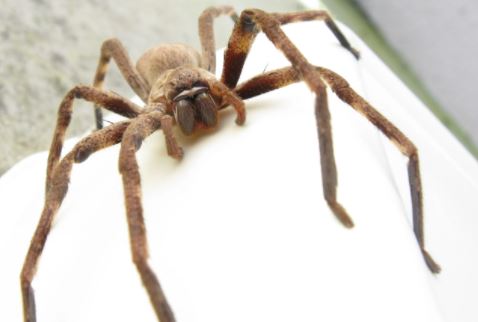 The name rain spiders came from the fact that the huntsman spiders do not like living in a rainy or wet environment.

During the rainy season, these creatures like seeking shelter in dry places including houses and under rocks.

This insect appear very scary but are actually not too aggressive and will not bite unless they feel threatened. Rain spiders can be found in South Africa, and there are several ways to get rid of them.

Here is everything you need to know about rain spider and how to get rid of them from your home.

If you live in Kwazulu Natal, Mpumalaga, Limpopo, North West, Eastern Cape, and Western Cape, then you must always be wary of these creepy animals.

Is a huntsman spider poisonous?

Yes they do. However, aggression is always the main determinant if they will bite or not. The huntsman spider is usually not that aggressive, hence it can hardly bite unless in instances where it feels threatened. Their poison is weak and in case you are bitten, you may only suffer symptoms similar to those of someone who has been stung by a bee. Their bites heal on their own after two or three days.

You may be wondering, “Can rain spiders jump??” The truth is that they do not jump but can move at high speeds especially when threatened.

It is necessary to understand the structure and body form of rain spiders so that you can identify it upon seeing one. Usually, Huntsman spiders have large bodies compared to their cousins. Their bodies can grow to lengths of 15-36 mm, and the legs span up to 110 mm. Their eyesight is not as developed as that of the jumping spiders. This, however, does not mean that they are not able to detect any approaching human being or animal.

Their preferred habitats are Scrubland and Savannah woodlands but the specific areas where you are likely to find them include:

In some cases, they may crawl and make their way into the house while seeking drier places. It is, therefore, possible to see them under couches and other furniture.

How to get rid of rain spiders in South Africa