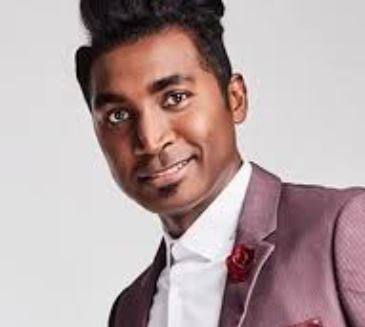 Emo Adams is a South African celebrity who is widely celebrated in the music and movie industry.

He has successfully combined both theatrical and musical talents and has therefore become a household name in SA.

Emo is popularly known for his collaborations with Taliep Petersen and David Kramer, he is also renowned for his spectacular work on the Malan and Kie, SABC2 series.

He is a distinguished personality who has proven his dynamism in the media. He has succeeded in almost every aspect of the media; from hosting Tv shows, to appearing in movies and producing his own songs. Emo has served as an icon of inspiration and motivation to a lot of people.

He came into limelight through his debut music album “Tall, Dark & Afrikaans” in 2007. He started singing at the age of nine and was largely inspired by his equally talented brother, Luqmaan Adams.

His debut album earned him wide recognition but before then in 1996, he formed a band with three of his other friends and his brother Luqmaan.

Their band gained wide recognition and they were celebrated for their perfect harmonies and outstanding performances.

Emos Adams was born and bred in Cape Flats, he was born to Omar and Mardeah Adam. He attended Spine Road High School in Mitchell’s Plein and later went to Boston House College where he discovered and honed his theatrical skills.

He appeared in his first movie at the age of nine, District 6, a popular theatre production District 6 work written and produced by his mentors David Kramer and Taliep Pietersen.

After his acting debut, he started working as a performer and he spent most of his teenage years rehearsing with the Malay choirs melodies whom he performed with annually.

He has appeared on screen in movies and Tv shows like: Pretville, Alie Barber, Your Show With Emo, Malan and Kie, Noot vir Noot etc.

The couple who have been married since 2008 will be celebrating their thirteenth wedding anniversary this year. The couples have four children together.