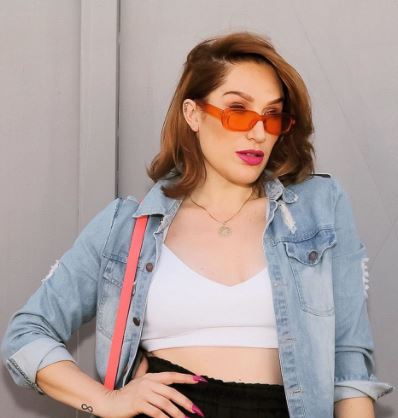 Tamara Dey is known as the first lady of Kwaito, she earned this title after having been able to bridge the gap between different age groups, cultures and languages in South Africa through her music.

She has been acclaimed to be the artist who has tried to bring different languages together and unify them through her music. This is probably due to being born to parents of different nationalities.

Tamara is a club diva, songwriter and singer, she was born to an Italian father and a South African mother in Belgium, she however grew up in South Africa where she has a thriving musical career and has been making waves since she made her first appearance.

Her career was launched officially in 2000 after she was introduced to Oscar Mdlongwa and Bruce Sebitlo of Brothers of Peace by DJ Pepsi.

After they met, they worked together and produced her first official track – Thathi’ Mphahlayakho.

Sequel to this, her career began to grow in leaps. In 2003, she was invited to Egypt through collaboration with the South African government for a televised tour of the country, and in the following year, she performed the opening act for Enrique Iglesias when the Latin singer toured the country.

In 2003, in collaboration with the South African government, the Egyptian Embassy invited the music guru over to Egypt for a televised tour performance of the country.

Then, when Latin singer Enrique Iglesias toured South Africa in 2004, she was the opening act.

Tamara has produced musical albums titled “The first lady and the boys,” and “Dey L’afrique.” She also produced other albums like Danger and Killer Moves with Flash Republic.

Aside from being a solo artist, she has collaborated with other artist for tracks. Some of her songs and collaborations include: Learn to Fly, This Must Be Love, Trip’ En, Like a Moon, Colors, What Am I to Do, S’Groovy Baby, It’s Disco, Fall into You, So Sweet, Fly Stars etc.

Her various attempts to bring together different languages as made her style of music to be dubbed as “the unofficial language that celebrates the heart and soul of South Africa.” Her music has been nominated for different SAMA awards, Cosmopolitan Magazine’s Awesome Women of the year, Best Female Artist of the Year, Best Female vocalist of the year etc.

She has had a whirlwind of appearances in the media and has appeared on Tv and radio shows. She has also appeared several times on tabloids. Some of the programs she has featured on in the broadcast media include: Marie Claire Seventeen, Elle The Citizen, Sunday Times Y Mag, Top Billing The Star, Channel O Phat Joe Show, etc. Aside from this, she is also a brand ambassador of brands like Safilo (Dior Eyewear), Emporio Armani and Armani Collezione, Carlton Hair – David Guilson (Celebrity Hairstylist) and Michelangelo handbags (Milan).

Tamara is an alumnus of Pretoria Tech where she studied Musical Theatre. She has a daughter with her baby daddy, Ningi Mhinga, who is the first son of Yvonne Chaka Chaka, a popular South African songwriter, singer, teacher and humanitarian who served in the South African Air Force as an Honorary Colonel.

She filed a lawsuit against him for not making adequate financial support towards the upkeep of their child, but Ningi refuted the claim and said he provides more than enough for the child’s upkeep. He however visits the child and spends time with her.