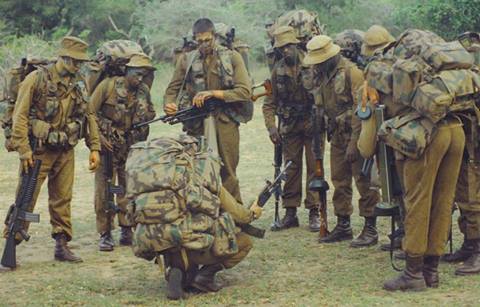 Every life matters, even those whose job is to make sure our lives are safe. Despite this, there are some interesting information to know about those who put their lives at risk for us.

They rank second in bush warfare after British SAS and 46th generally in the world.

But note, no amount is being able to make up for their dedication and selfless nature.

What South Africa did in World War II:

South Africa, like many other states, significantly played a role in World War II. Many South African young energetic men were recruited for military service. They manned ships against the Japanese while the 6th Armoured Division fought numerous actions in Italy between 1944-1945. About 334,000 men volunteered for full-time service in the military. According to records by the Commonwealth War Graves, 11,023 known South Africans lost their lives during this war.

South African soldiers are well equipped. In the secret service, in case of a mini operation they have a kit that weighs 60-80 kg, while in a long-distance operation, their kits weigh 100-130kg. They are classified into infantry weapons and vehicles ranging from Armoured cars, aircraft, fighter jets, and a few more.

Since its establishment in 1972, the South African Special Forces have come a long way to ensure peace and stability in South Africa. Their role cannot be questioned because they were very instrumental in the 30 year-long war. Although their resources were limited and the numbers were against them, they still made a difference. The South African Special Forces’ loyalty is unquestionable. We should always acknowledge their efforts for the mere fact that we enjoy peaceful coexistence. This should be highly credited to those dedicated selfless men and women.