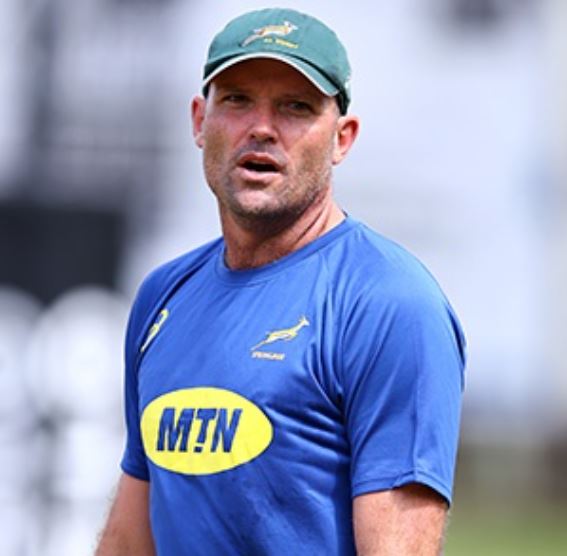 Although the news of the appointment of Jacques as the new coach of the South African national rugby union team may be a shock to some, it has been anticipated by several media outlets for a while.

A reason for this is that the new Springboks coach is seen as a confidant and right-hand man of Rassie Erasmus, South Africa’s Director of Rugby.

Jacques Nienaber is a trained physio, who has served for the regional rugby union team based in Bloemfontein. The defensive guru will officially bear the title of Springbok manager until the 2023 Rugby World Cup.

While the new coach takes over the day-to-day running of the team, it is apparent that Rugby Director Rassie Erasmus continues to take charge of major decisions. Even though Nienaber has never been a head coach before, he is considered as one of the best brains in the rugby community today.

Jacques Nienaber was given birth to in Bloemfontein, the capital city of Free State province in South Africa, which was also where he grew up and completed his education.

Apart from that, the new coach is the only child of his parents. His father, Gerrie Nienaber, works as a sales personnel for a steel company while his mom served as a book-keeper. The new Springboks’ coach considered himself as a privileged child because they belonged to the middle-class status in South Africa.

Nienaber was not an active rugby player in college as he preferred long-distance race. While in the university, he served in the army together with his longtime friend and partner, Rassie Erasmus. He started his coaching career after becoming a certified psychotherapist.

Jacques Nienaber may look tough as a coach, but he is a man that enjoys life from his always smiling facial expression. The new coach is married to Elmarie, his wife, for two decades. They both have two kids, Carlo (13 years) and Lila (9 years). According to Nienaber, three things get his interest: wine, investing, and project management.

The coach was privileged to work in the South African army for a year, and it was during this time that he and the former Springbok coach, Rassie Erasmus, served together. This means that the relationship between the duo is not newly-formed but had existed for years.

Interestingly, he still had the privilege of working under Erasmus, who was also the head coach. During their time, in 2006 and 2007, the Cheetahs were proud to finish in the 10th and 11th places respectively. Apart from that, the team also won the Currie Cup, which made them share the title with the Blue Bulls in 2006.

Within the space of seven years, Nienaber was a defensive strategist for Sprinboks’ junior team, Stormers, and Western province. SA Rugby Union appointed him as the High-Performance Director until he decided to join his friend Erasmus at Munster at the start of the 2016/17 season. In June 2017 the South African Rugby Union announced that Nienaber would make a move back to the country in late December.

The former physiotherapist led the defence of the Springboks to support the national side in securing the 2019 Rugby Championship and World Cup Rugby.

On the 24th of January, 2020, Nienaber was named the coach of the South African Rugby team, Springbok. He took over from Rassie Erasmus, who took the Springboks to their third World Cup victory in 2019. Jacques admitted that the new position is not only a massive honour but also responsibility.