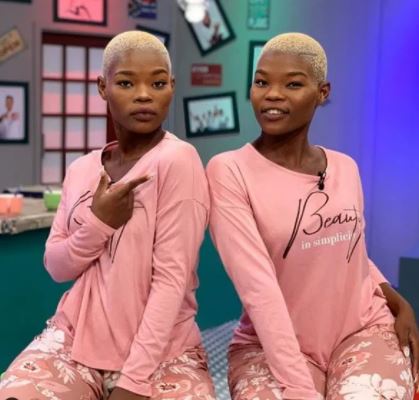 Qwabe Twins are the two ‘identical’ ladies, Viggy and Virginia Qwabe who participated in the 2019 SA Idols, a singing competition.

The Idols twins competitors were born in 1997. Viggy and Virginia hail from Stanger, Durban, KwaZulu-Natal in South Africa.

Given their background, it is very unsurprising that the twins first got their musical experience at an early age in church where they began singing and composing songs.

The name of Qwabe twin’s father is Lawrence Qwabe. Their father, Lawrence Qwabe, is the founder of the Pure Freedom Christ. Arguably, the twins were brought up in a spiritual family.

Virginia and Viggy were favourites to many from the start with some anticipating that they were to emerge Idols top 2 finalists. Luyolo finally won the contest with Sneziey Msomi finishing in the runner-up place.

Viggy Idols performance, in particular, saw some people make an early winning guess. Unfortunately, when her twin got eliminated, she dropped from the competition.

The decision to drop from the contest was arrived at after bullying and rigging claims surfaced. Their fans got agitated with twins with some leaving harsh comments on their social media pages.

Fortunately, the competition marked the beginning of their booming career. Two giants in the music industry expressed their interest to assist them in achieving their dreams, Zahara and DJ Tira. DJ Tira managed to win the twin’s hearts over Zahara.

To start, DJ Tira announced that the pair were going to make an appearance in one of his video songs, Woza Mshanami. Also, he has already released one song with them.

Currently, Qwabe twins are among the best musicians in South Africa. It is a few months into their career but the youngsters seem promising.

Despite them failing to meet their fans’ expectations in the 5th season of Idols SA, they are back better than before. Precisely, they have a lot in store for their fans in the coming days.