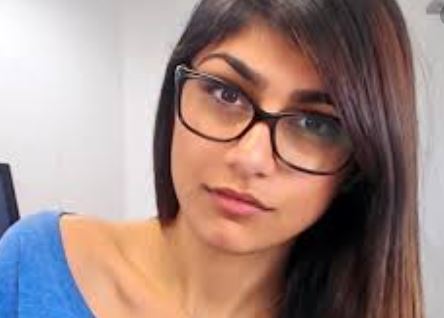 Mia Khalifa is an American-Lebanese actress who has gained global recognition for her adult content career. The 28 year old was born in Beirut Lebanon but moved with her family to America in 2001.

While she was a student of the University of Texas, Mia shuffled between modeling jobs, bartending and being a briefcase girl. After she graduated from the university; she moved to Miami and started modeling nude.

She was disowned by her parents after she began to do adult films in October 2014, she was brought up by them in the Christian faith but she didn’t believe in it nor practice Christianity. She further brought much controversy on herself from the Arabians and the Lebanese when she did an adult film with a hijab on.

She was heavily criticized by the Islamic community for bringing sacrilege to their religious outfit and she received lots of death threats from them.

This controversy attracted popularity from different bodies and organizations; A British Men’s Magazine called Loaded tagged her as the fifth most notorious adult content performer in July 2016; also, alcohol advertisements began to refer to her and Timeflies Pop band also made a song titled Mia Khalifa.

Mia said several of the reasons that led to her resignation was that she had already received threats from the ISIS; she began to lose valuable relationships as people didn’t want to be associated with her even her family and friends severed their ties with her because she went against their faith and that of her country.

She however defended her decision by saying that she had low self-esteem, and had never gotten male attention before, so she was excited when she got the chance, as the industry provided her with the platform. Her low self-esteem even made her do a breast augmentation. Mia however admits being ashamed of her past.

Mia Khalifa who is now a webcam model and has about 18 million followers on Instagram, currently works as a bookkeeper and a paralegal. She is presently married to a Swedish Chef after they got married in 2019. Her first marriage to her high school sweetheart crashed after three years.

They got married when Mia was eighteen in 2011 and were finally divorced in 2016.

Aside from being a webcam model, Mia also works as a sports commentator and once hosted a sports show on Out of Bounds for Complex News YouTube channel, and SportsBall. She unashamedly identifies with soccer and is a fan of the West Ham United from the English Premier League She also has her own YouTube channel where she does live streams.