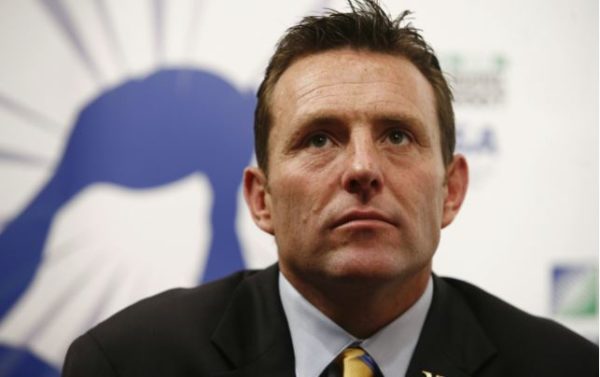 Joel Theodore Stransky is a South African former rugby union player. A fly-half, he is known for scoring all of South Africa’s points, including the winning drop goal, against New Zealand in the 1995 Rugby World Cup final.

Joel was born on the 16th of July, 1967. He is married to Karen Stransky. Their union have been blessed with two children who are Sabrina and Matt.

While growing up in Cape Town, Stransky attended Rondebosch Boys High School, but then, he switched to Maritzburg College, Natal, where he had his senior matric years.

Also, while at College, he was privileged to meet with a well-known figure in schoolboy rugby by the name Skonk Nicholson who trained him before he went back to Natal after his military conscription in Pretoria. Then, he also studied at the University of Natal.

Joel Stransky is known for his frequent involvement in the Absa Cape Epic race. But unfortunately, Joel Stransky fell at the opening stage prologue in 1997, and he was denied from continuing the race as he was airlifted to the hospital. His injuries included a punctured lung, broken ribs, and extensive facial lacerations.

Following the horror crash, the only option left was for a plastic surgery to be conducted on Joel Stransky face. But early before then, in a chat with Netwerk24, Stransky lamented of pains. He said, “I’m in immense pain, but I’m receiving painkillers, and it helps me to sleep. I’m lying with a pipe in my rib cage to drain out the moisture that has formed on my lungs – which was caused by the broken rib”.