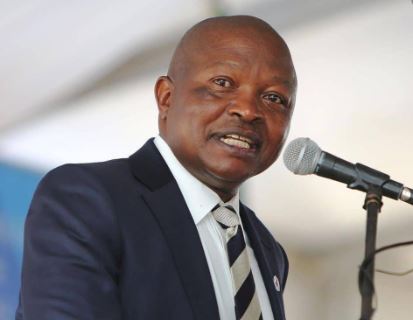 David Mabuza, the current Deputy President of the republic of South Africa is a name is not unknown to most South Africans but there are details about the man David Mabuza that are not known.

David Mabuza is first a politician before anything else, his political track records dates back to his twenties, during his younger days and his days as a student in UNISA.

He also joined the United Democratic Front through the aid of his mentor, Mathews Phosa in 1986, and this later on served as the foundation for his political aspirations.

When he was a student in UNISA, he served as the secretary of AZASO, an organization for Azania students. And after this, he rose to become the chairman of NUESA from 1986-1988. Also, he was the treasurer of Foundation for Education with Production (FEP) at about the same time and further went ahead to become the coordinator of the National Education Crisis Committee.

He has steadily ascended high in his political career and will always be remembered by South Africans.

Mathews Phosa, his mentor helped him to secure a role as an Executive Council in MEC for four years, starting from 1994, at about the same time, he served as the regional chairperson of the ANC. He went ahead to become a member of the Provincial Executive Committee of the ANC between 1998 and 2006.

Mbuza also served as the member of the parliament and the Mpumalanga legislature between 1999 and 2001 – 2000 respectively.
In 2007, he got behind Zuma’s successful bid for the top job in South Africa. In the same year, he became a member of the ANC National Executive Committee.

In 2009, he became Mpumalanga’s Premier. In an internal election campaign to select Zuma’s successor, he was an opposition to President Ramaphosa until the last minute.

Like most politicians and famous persons, the DP has his own share of scandals too. In 2012, he was involved in a corruption scandal after R14 million was reported to have disappeared in his house.

His name has also been constantly linked with murder of Jimmy Mohlala. He is labeled by the international media as one of the most dangerous politicians in SA and cases of his corrupt practices have been reported by them several times.

His personal life isn’t free of the hitches either, he and his first wife, Ruth Funi Silina hit the rocks in their marriage and divorced each other.

Then he later married Nonhlanhla Patience Mnisi, and the two are still currently married to each other.

If Mbuza was not a politician, he probably would have been a teacher. He has held teaching-related positions. He was the chairperson of the South African Democratic Teachers Union between 1988 and 1991.

He was also a teacher at KaNgwane Department of Education (1986 – 1988) and a principal at Lungisani Secondary School (1989 – 1993) even though he got a Bachelor of Arts degree from UNISA.