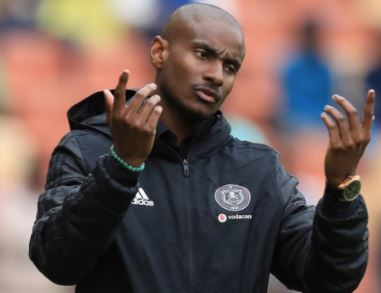 Rhulani Mokwena is presently the coach of Chippa United, before this he was an assistant and interim coach at Orlando pirates.

He is a renowned coach that is popularly known for his outstanding skills and history in the world of soccer.

The soccer ability he exhibits seems to have been handed down by his grandfather down to his own father, who then passed his traits to him.

In the 1960’s his father, Julius ‘KK’ Sono dominated the football world. He was a player in the Orlando pirates. And his grandfather, Eric Scara Sono, was also a player in the same team. In fact, during his days, Eric was the captain of the team.

Rhulani’s professional coaching career started out in the youth systems at Silver Stars, before he was appointed to assist Pitso Mosimane in leading the Mamelodi Sundown.

While he worked with the Sundown, he appeared in 103 games as a coach.

Years down the line, he was asked to join the Kaizer Chiefs, a family-affiliated team which he did before taking up another job as an assistant manager in Orlando pirates in 2017.

After two years of being in the club, his head coach Milutin, unexpectedly resigned and he was appointed as the caretaker manager of the team for five months.

He left the team the following year to lead Chippa United as the head coach on a short term deal, however, that was after he had been reverted back to his position of being an assistant coach and Josef Zinnbauer made the head coach.

Rhulani has an admirable career as a coach but it would be surprising to learn that he hadn’t always wanted to be known for soccer.

When he was younger, he had dreamt of becoming a politician. As a student, he was exceptionally good at history and English language.

He was aspiring to be like his favorite politicians who were Napoleon Bonaparte, Nelson Mandela, Walter Sisulu, and Thabo Mbeki. But as fate would have it for him, he ended up studying sport science in the university.

And today he has a commendable soccer career.

Aside from building his own career, Rhulani is also passionate about helping young coaches grow especially the female ones.

He claimed that the aim of this is to bridge the gap of gender inequality that existed between the male and the female in the soccer world.

Ever since the establishment of the academy, it has been on the forefront of using football to attain sustainable development in the nation.