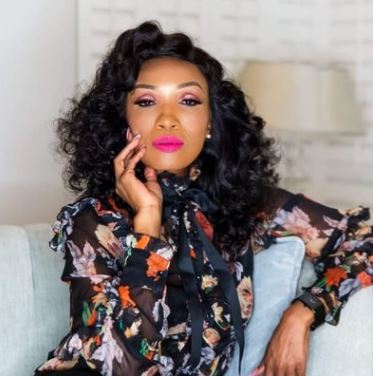 Born on July 15th, 1972, in Soweto, the 47-year-old Sophy Ndaba rose to fame through her 20-year role as Queen Moroka in the popular soap opera known as Generations.

She has also played a role in movies such as She is King and Gog’ Hellen. More to that, Sophie also presided over Miss South Africa 2016 beauty pageant finals as one of the guest judges.

She is also an MC, event organizer, and a motivational speaker.

Sophie married businessman Max Lichaba in 2017 after she met him through his brothers.  A furious Max came out guns blazing and defended his wife when people on social media claimed that she was dying of HIV because of her weight loss.

Recently though, she shifted gears and re-invented herself as a TV presenter and talk show host. She runs the talk show Hashtags on e.tv.

She said the process of re-inventing herself started with her decision to take on different roles like Isidingo and channeling her focus to new business ideas.

Mrs. Lichaba is more excited at the fact that after starting as a broke teenager, and she can now look back and smile at her achievements as an actress, model, and now businesswoman.

Recently, Max Lichaba’s wife has attracted a lot of attention after sharing numerous posts that reveal her drastic loss of weight. Whether Sophie Ndaba weight loss is attributed to an illness is a matter of pure speculation.

Of course, Soap Generation fans have talked about the surprising turn of events, but during a session on Metro FM with the Fresh Breakfast team, she clarified that hard work was the primary reason behind her dramatic weight loss.

In fact, looking at her pictures after weight loss, you will need some convincing news to believe that she is a mother of two grown up girls and a young man. ( Rudo, Shallon and Lwadle Ndaba )

Although the South African stage queen has diabetes, she has vowed in one Sophie Ndaba Instagram post to fight against it with everything she has.

She writes saying that she is self-proclaimed ambassador for all those who are battling terminal illnesses and are perhaps too scared to speak out or even fight.

In spite of Sophie Ndaba diabetes, this iron lady has maintained a consistent positive attitude and gone ahead to inspire others to face their health challenges.

Just recently, Sophie Lichaba received a gift in the form of a mansion from her caring hubby. It is amazing because even during Sophie Ndaba wedding, he did not drop such a lofty gift! And as far as weight loss is concerned, these Sophie Ndaba latest pics can now confirm that nothing is impossible where there is determination.