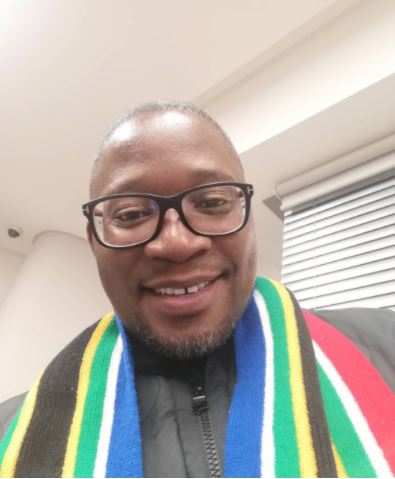 Walter Mokoena (born in 1978) is a South African sports personality and news anchor. He is currently the Special Adviser to the Minister of Sports, Art and Culture.

The renowned media personality was born in Middelburg, Mpumalanga, where he grew and started his education. He is now a permanent resident in Johannesburg, Gauteng, South Africa.

Walter is son to Aaron German Mokoena and Betty Velephi Nene. He is the firstborn in the family of four, among them his two younger brothers and a sister.

Young Walter attended Mphanama Comprehensive High School from where he graduated in 1996. It is at this institution that his passion for student politics poured out.

Becoming president of the SRC at the age of 16 saw his name enter into the school record as the youngest contestant to have won such an influential rank.

Mokoena proceeded to study at Catholic University of Paris, Fall (2011-2012) and later enrolled at the University of Johannesburg (UJ) for his Transitional Justice studies.

He then graduated from the school of Leadership in UJ with an honours degree in Policy & African Studies. He is now an ongoing Master’s student at UJ where he is specialized in Water governance and Diplomacy.

The sports presenter walked down the aisle with his long term girlfriend, Nosizwe Vuso, in 2016. In attendance were the former president Jacob Zuma among other distinguished guests.

Several controversies surround Walter’s life, given that he has been involved with more than one woman in his life. He has a daughter with his wife, Nosizwe Vuso. Additionally, the sports personality is Pearl Thusi baby daddy.

The fact that Pearl Thusi and Walter Mokoena are no longer together has never made him less of a responsible father. Walter Mokoena and his daughter Thando Mokoena seem to have a good chemistry.

Walter became a broadcaster in 1998 after his role at Heart FM (formerly P4 Radio Cape Town). It is about the same time that he became a City Press newspaper soccer correspondent freelancer for Cape Town.

Mokoena later joined Kaya FM in August 1998, where he became a sports anchor in a breakfast show in addition to other roles a Soccer Talk Show host. In the wake of 2000, Mokoema took over “Mabaleng” at SABC as an anchor. This prime-time sports show on Saturday afternoons propelled his career even further.

Mokoena went on to embrace other promising roles at SABC 1. It is at this channel that he served for four years hosting Blow by Blow and the Monday night Coca Coca Soccer Zone. Besides, he worked for other programs, among them Laduma and Live Football show.

His career took on a steady ride when he was chosen to present the FIFA World Cup in 2010; live from Zurich. He was also involved in live coverage of Athens Olympics.

Walter founded SoccerLife 442 but later sold it to Avusa Media, who then rebranded it to Times Media Group. He then founded and published his second weekly Football Arena, which also became a success.

2010 was another year of success for the celebrity who presented the South African held FIFA World Cup. It is through his frequent engagement that he developed an interest in the water business. The Suez Environment accepted him as their consultant and South African representative.

SABC accepted him back as a football anchor upon his return to the country in 2015. In 2016, Walter presented the European championship live from France.

Walter’s ability to balance between career and family tells it all that he is a true talent in the industry. He has now become an authoritative source of inspiration for his life struggles and breakthroughs.