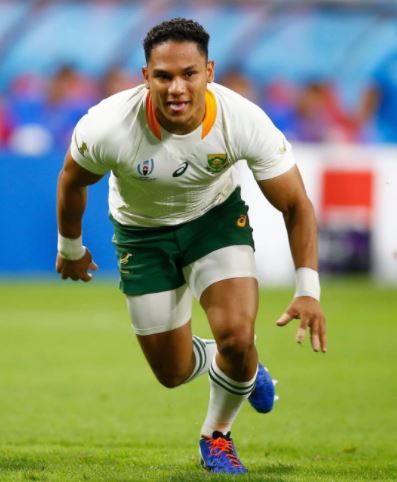 The star was raised in Kylemore by his loving parents. His father is 55-year-old Sammy, while his mother is 48-year-old Adeline. The two are very proud of their son’s achievements so far.

Since they realised that their son was passionate about rugby, they have supported him in the best way they can. It is interesting to note that the player got his athletic genes from his father, Sammy. Herschel Jantjies father is a former military man who served in Namibia. He also played football until the birth of his son, who inherited his agility and strength.

The star went to PC Petersen Primary School for his primary level education. Herschel Jantjies school teacher, Johanna Hendricks, who taught him in grade two, asserted that the star was brilliant in his academics.

Herschel high school education was obtained from Paul Roos Gymnasium. This is a prestigious school that has nurtured the talent of many sportspeople in the country. He went to the University of the Western Cape for higher education.

The star is currently in the Stormers team. He joined this team in 2018 and was included in the squad for the final match in the Super Rugby season. The team played against the Sharks. He made his debut in Super Rugby as a second-half replacement.

This player’s regular position is that of a scrum-half. He works very hard to ensure that he is the best that the team has ever had.

Jerome started playing when he was very young and had a record of impressive scores. In 2012, he played in the Under-16 games, where he represented the Western Province.

In 2013 and 2014, he also played in the Craven Week matches, and his scores were impressive. The player went on to play in the under-19 and under-21 games. He later made his debut as a first-class player in 2016 at the Currie Cup qualification championships. He then played in the 2017 Rugby Challenge and Western Province U21.

In 2018, he played in the 2018 Rugby Challenge, where he scored his first and second tries. His team made a 23-21 victory against Boland Cavaliers. He also scored a try in a game against Border Bulldogs.

The professional rugby player has made huge milestones in his career recently. He is expected to sign wallet-fattening cheques in the future. Presently, his salary has not been disclosed.

The rugby player made South Africa’s 2019 Rugby World Cup squad. Before the main games, the entire team went for an intense camp at DHL Bloemfontein. He, alongside the rest of the team members, defeated England in the final match.