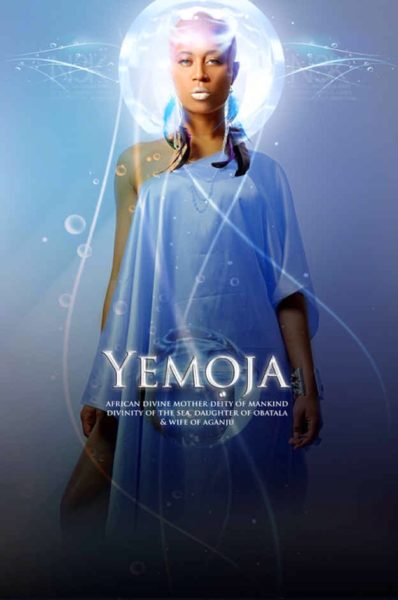 Everyone has their belief and opinion. Africans had always believed in the existence of the Supernatural even before they were colonized and introduced to Christianity.

They believed that the real creator appointed lesser African gods and goddesses to perform certain functions. As such, Africans have the god of water, rains, winds, earth, and fire, among others, whom they can pray to directly, and they will intercede on God’s behalf.

1. Oshun: Oshun is a popular African goddess whose origin is from Osun State, Nigeria. She is so endowed with her beauty that she has a mirror to admire her beauty. Oshun is revered by many for her abilities to heal the sick, foster prosperity, and bring fertility. The image of this goddess is represented by a stunning, charming, and coquettish young lady. Oshun means sweetness, joy, beauty, and good cheer.

To show the extent of her beauty, Beyonce hinted about her in her Lemonade music video.

2. Oya: She is a ferocious and protective deity worshipped by the Yoruba tribe in Nigeria, as well as some Brazilians. Oya is the wife of Sango, the god of storms. Oya is the goddess of wind, thunderbolt, and fire; she has the power to transform gentle breezes into raging hurricanes or cyclones. It is believed that she accompanies her husband during his thunderstorms to destroy buildings, blow things up, and rip off trees.

Due to her prowess, Oya brings down dead wood to give room for new. Additionally, she is the guardian of the gates of death, as she helps the dead in their transition from life.

3. Ala: Ala is one of the oldest Igbo goddesses. Her name ‘Ala’ means earth in English, demonstrating her power over the planet. Ala is the goddess of fertility, creativity, land, and morality. She is the wife of Amadioha, the god of the sky. This goddess is honored and celebrated during the yearly yam festival. When angered, Ala will convince her husband to deny rain to the people and can also cause other natural disasters.

4. Yemaya: Yemaya is not easily angered, but when she does, she is destructive and intense just as the sea during a storm.

Yemaya is considered the mother of all since she is the goddess of the Living Ocean. All life is believed to have started in the sea. Yemaya is motherly and protective of all her kids, comforting them and cleansing away all their sorrows. It is thought she can cure infertility in women, and the cowrie shells symbolize her wealth.

Modjaji is a South African goddess of rain whose spirits live in the body of a young woman. She is considered a key figure by the Balodedu people, as she can start and stop the rain. The rain queen has been around for the longest time, and it was only in the 16th century that her spirit decided to dwell in a woman.

6. Nana Buluku: Nana Buluku is a prominent deity famous in most West African nations. She also has different names in various tribes. Nana Buluku is worshipped as the mother goddess. Her image is that of an older woman who is thought to be the creator of the world.

7. Abena: Known as the river goddess, Abena shields children and looks after them as adults as she perceives her believers as her children. Her name is associated with gold, brass, as well as with other wealth symbols.

8. Oduda: Oduda is among the African goddess names and meanings venerated by the North-West African community in Benin, Yoruba, and Dahomey. Her name Oduda means ‘the black one,’ and her appearance is that of a serpent. Oduda is the deity behind sacred prostitution that is practiced in the Caribbean Islands.

9. Inkosazana: Inkosazan means ‘lady heaven’. She is a prominent and adored goddess of the Zulu community in South Africa. She is thought to be responsible for corn, one of the vital dietary supplements in the Zulu tribe.

10. Age-Fon: Other than the African goddesses, there are gods that cannot go unmentioned in this piece. Age–Fon is a god in Benin, whose power and fame go as far back as the Dahomey Empire. He is the son of the creator goddess Mawu-Lisa. Age can protect and lead hunters in their hunting expeditions, whether at night or during the day. Besides, he also guides and safeguards his tribesmen in times of battles and wars. It is alleged that Age replenishes his energy and power from his mother. His image is that of a young lad wearing hunter’s clothing. To honor Age-Fon, hunters sacrifice to him fleshy parts of the animals they hunt.