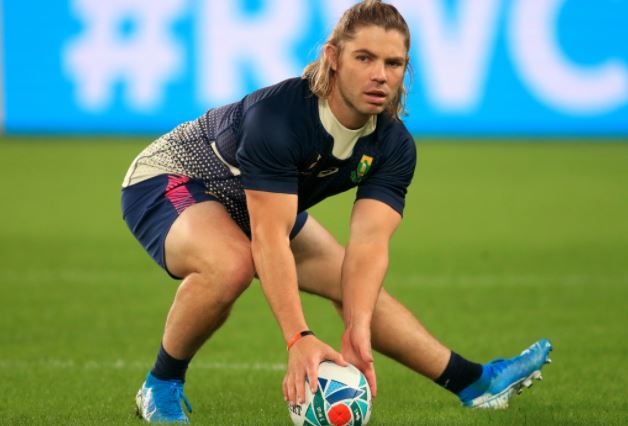 Faf de klerk is a South Africa professional Ruby player who has been known for his amazing moves and tricks in the game.

He is one of the popular and energetic rugby player from South Africa.

The 27 years old talented player was born on the 19th of October 1991 in Nelspruit, South Africa. At birth, his parents named him François de Klerk.

Many people often call him Faf de Klerk Giant Slayer because of his playing skills. Here’s 6 things you might not know about the player:

Fad de Klerk weighs around 88 kilogrammes (195Ibs), his height is 1.72 metres (172 centimetres/ 5 feet 7.5 inches). The rugby player’s long blonde hair is his distinguishing feature while on the field.

Little is known about Faf’s family background. Faf showed interest in rugby at a tender age. He went to school in Pretoria where he was an active member of the rugby team. He attended Laerskool Bergland, where his interest and passion was nurtured. His peers, teachers, and coaches knew him for his fearlessness and persistence.

In high school, Faf’s love for rugby grew bigger. With the assistance of amazing coaches, he developed his trademark demeanour of tenacity.

When Faf was 16 years old, he joined Blue Bulls. He joined the team in 2007. In 2014, he was part of the Lions team during the 2014 Super Rugby Season. In his debut game in this season, his team won 21-20 against the Free State Cheetahs in a match that was held in Bloemfontein.

The following year, he participated in the 2015 Super Rugby Season where he displayed his expertise in the game. As a result of his impressive performance, he became part of the Heyneke Meyers 2015 extended Springbok training squadron.

In 2016, he joined the Golden Lions where his performance continued to improve. His squad played at the Super Rugby in 2016 where he made his Springbok debut in a game against Ireland. In May 2017, Faf signed a three-year contract with Sale Sharks. He relocated from South Africa to Manchester.

The Rugby player got an invitation to the Springboks squad to participate in the 2018 summer test series where England played against South Africa. His test cap tally was 21 at the end of the 2018 season. After the 2018 season where his performance was mind-blowing, Faf signed a new contract with Sale Sharks. According to the agreement, he will be part of the team until 2023.

4. Income and net worth

Faf de Klerk salary is yet to be known . In 2017, he allegedly signed a 21 million rand contract when he first joined Sale Sharks. Since he has already signed another contract with the team, it is apparent that the remuneration package and the terms of the agreement are better than the first time. His net worth is a well-guarded secret at the moment.

Faf has a beautiful girlfriend whose name is Miné van Niekerk. In December 2017, she visited South Africa where her famous boyfriend was born and raised. The couple is yet to get married.