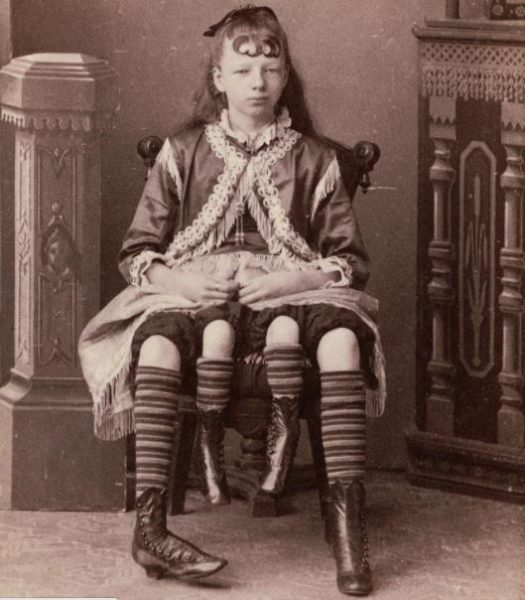 The birth of Josephine Myrtle Corbin took the world by surprise when she was born with four legs and two sets of genitals.

While some must have seen it as a sign of the end of time, others must have concluded that it was a myth that computer nerds fabricated.

But whatever the shared doubts and opinions may be, Corbin came to the world and lived a healthy life. This article discusses four facts that will shock you about her.

1. She was an ordinary girl with sound health

In Texas, Josephine Myrtle Corbin was seen as natural beauty. The doctors that carried out a test on her after she was born confirmed that she was healthy and robust and could operate like every other normal human being. Based on a quote by Lewis Whaley in the 1889 British Medical Journal that was published on Wikipedia, Josephine was described as being five feet high with curly hair, fair skin, and blue eyes.

2. Josephine was a sideshow performer

Because of her exceptional looks, it dawned on her father that he could charge curious residents a token to look at his four-legged Josephine. So, while at the age of thirteen, the girl began to travel to different towns for sideshow performances and she earned a lot of money.

3. She got married to a doctor and had five children before she died

While some people could have wondered who would anyone marry a girl like Josephine, interestingly, when she was nineteen, she got married to a doctor known as Clinton Bicknell. Then, not only did she marry, but she also had five children in the process (a boy and four girls). Since she had two pelvises with a fully formed set of genital organs, both were duplicated. With that, she was able to carry three pregnancies on the right side and the other two on the left.

4. Corbin preferred to have sexual intercourse in the right side

It was like a surprise to her when she had her first pregnancy. When the news was shared with her, Corbin was quoted to have responded in disbelief that, “If it had been in my right side I would come nearer believing you are correct.” Based on what she said, it became glaring to everyone that the four-legged woman enjoyed having intercourse in her right side compared to her left side.

How did Myrtle Corbin die?

Unfortunately, after suffering from a streptococcal skin infection, Myrtle eventually died on the 6th of May, 1928. Even though the condition could have been treated easily today with antibiotics, there was nothing like such treatment in the 1920s.