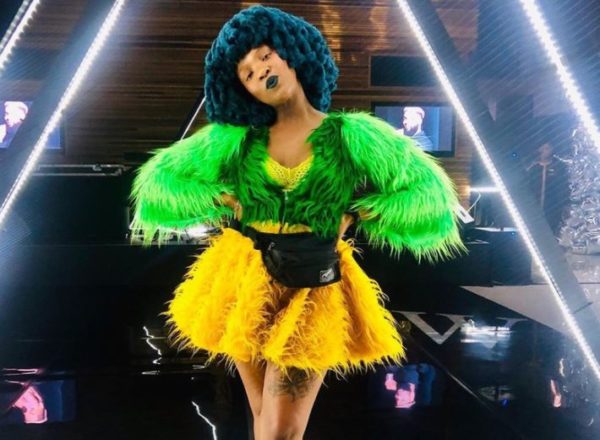 She is popular for her signature blue-coloured hair and her self-created music genre called “Future ghetto punk”.

She came into limelight after her hit collaboration “Midnight” with Dj Maphorisa. Her sound is very unique and she calls it “Future Ghetto Punk”.

Moonchild Sanelly has worked and performed with the crème de la crème of the music industry. Some include Beyonce, Busiswa, Wizkid, Dj Maramza, Dj Maphorisa and many more.

Everything from her singing, incredible voice and fashion choices make her pop. In this article, we’ll be revealing some details you probably don’t about the entertainer:

1. The artist’s stage name ‘Moonchild’, stems from her spiritual background, the name is a direct translation of ‘iNyanga’, meaning moon.

2. The Port Elizabeth born musician moved to Johannesburg with just twenty-four songs and has been in the industry for 12-years and has evolved with time, transitioning from poetry to Hip-hop, Jazz and now, her new found sound which she coined as ‘Future ghetto punk’ in 2007.

3. The fashionable Sanelly who makes some of her clothes studied fashion design, and has admitted to once wanting to be a Psychologist.

4. Sanelly was raised in the spotlight since her late mother – who passed away when Sanelly went to fashion school – put her on stage when she was just six months old.

5. The musician is also a mother to three daughters who she sees occasionally as their based in Port elizabeth with their father’s grandmother. One of her daughters, Artemis, is a nine-year-old musician who is said to have finished recording her EP.

6. She was featured on Busiswa”s “Midnight starring”.

7. Moonchild mother was a Jazz musician before she passed away.

8. Our flag has been lifted up high, Beyonce The Lion King: The Gift album has been emancipated and we have our local talent attributed.

The album attributes local artists Busiswa and Moonchild Sanelly in a single titled My Power. Anatii is also certified as a writer, composer of two songs on the album, Mood 4 Eva and Brown Skin Girl.

9. The Singer and dancer Moonchild Sanelly has finally come out of the shadows, she reveals she has been raped in Joburg. Moonchild also unearthed how an uncle sexually abused her and when she took the matter to the law, she was told, this is a matter a family can resolve. Moonchild also asserted she was repeatedly molested by her younger cousin while growing-up.

10. Moonchild’s released an EP ‘Nüdes’, recorded at Red Bull Studios Cape Town, began its life in 2017 when she recorded the Xplosive DJ produced track “Boys and Girls”. The Maramza-produced “F-Boyz” which features Patty Monroe was als .