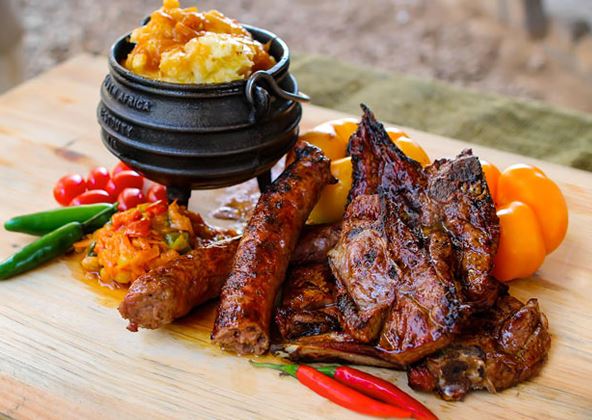 South African cuisine is a blend of the country’s regional dishes. Various ethnic groups like Zulu, Xhosa, and Cape Malay have enhanced it with their delicious preparations.

Amidst outside influences, French and Indian play an essential role. Be it a curry-based item or a pure vegan one, you will get all sorts of foods when you are in this country.

With so many traditional black South African recipes to try, anyone can come up with a mean South African dish to impress his or her guests.

A community is known for its cultural practices and identities. South Africa is no different. However, with the history and colonization background, the cuisine served in different parts of South Africa is richly diverse and unique.

The following are examples of traditional South African recipes with pictures you need to try.

Top on the list is Biltong which is most likely the beloved South-African snack pick any time. This is a cured, dried, and spicy meat that is difficult to keep your hands off. With several servings of this dish available, a good number of people go for Beef biltong which continues to be one of the favourites. It can also served more unconventionally as chicken biltong if that is what you prefer. The following recipe may come in handy.

Just from the name, this dish has Cape Dutch roots and origin. The pudding contains apricot jam, comes with a saucy feel and is spongy in texture not forgetting its caramel taste. The moment you get it out of the oven, a lot of people choose to add a creamy sauce over it. This gives it a sticky and very soft like dessert that resembles a cake.

Boerewors which translates to “farmer’s sausage” refers to a special minced meat kind of sausage. This special kind of sausage must contain 90% meat or more for it to be regarded as boerewors. Your mince mix should contain spices that include cloves, coriander, as well as nutmeg, all of which give it a distinct taste. Locals prefer making boerewors for themselves to give it a special touch.

You make them by frying pleated-dough pieces, which become even sweeter when you add sugary syrup. Usually, they have a golden, soft and crunchy crust, with its centre resembling that of a doughnut. They are also super sticky. You can choose to go for Malay version which means rolling it in desiccated coconut, and keeping the rich spicy flavour intact. Here is a simple recipe that you can follow:

To prepare the Koeksisters:

How to make syrup:

It is also possible to keep syrup cold by putting your syrup bowl in a different container full of iced water.

If you are interested in a real South African traditional food, then this is it. It may not be everyone’s taste, but bokkom which comes from the West Coast region of Mzanzi is such a delicacy. It refers to wind and sun dried small but whole mullet fish that are salted. It is often served as a snack and can easily be turned into fish biltong.

The Milktart which in Afrikaans is “melktert” is some kind of pie-like dessert that consists of unique but sweet pastry crust with some creamy filling created from milk, sugar, flour, and eggs. You can choose to buy it whole at all leading supermarkets. You should note that most families have their personal secret recipe which makes the dish unique in every homestead.

Bobotie is an all time dinner favourite in most homesteads. The dish contains some spiced mince, egg-based toppings, as well as some traditional sultanas or raisins thrown into the mixture. This gives the dish some sort of sweet taste. Considering that it has a Cape Malay influence, it comes with some additional spices that include tumeric, curry, turmeric, and almonds.

When considering the different cultures in South Africa and their food, this is one of the most dishes that cut across cultural divides. Traditionally, the dish was made in rounded cast-iron pots and then cooked over an open fire. Commonly known as pot food, or Potjiekos, this meal was traditionally prepared using vegetables and meat.

A mix of vegetables that include peppers, carrots, onions and tomatoes, this sauce is excellent for anyone that enjoys extra spicy dishes. Usually, it is served at braais as an accompaniment to side dishes such as pap. It resembles the polenta, only that it is smoother and goes perfectly with boerewors. Here is a recipe you can follow:

This dish is popular in all Afrikaner cooking. Vetkoek refers to fried dough bread whose meaning is “fat cake”. You may equate it to the Dutch oliebollen. Usually, it is accompanied by sweet or sometimes savoury toppings such as minced chutney and curry.